Getting catcalls from construction workers is a cliché of city life, but I had never heard any. Until it happened to me.
Luckily, it was another Bom Chicka Wah Wah promotion from Axe. 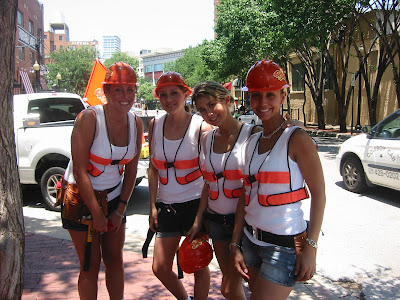 Men walking through the West End in Dallas were subjected to whistles and suggestive remarks from this construction crew. A “Bom Chicka Wah Wah” sticker on their hardhats was the only overt branding, besides an occasional shout of something like, “You must be wearing Axe.”
I overheard several conversations about the stunt throughout the day. And I must admit it did give my ego a bit of boost.
No word on if the spray gets the same results from actual union labor.
Email ThisBlogThis!Share to TwitterShare to FacebookShare to Pinterest