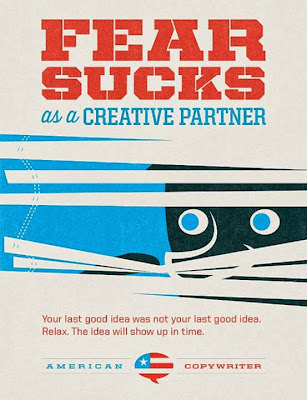 Melanie Sawyer is currently a senior writer at DDB in Chicago. Prior to that, she worked at Euro RSCG, The Richards Group, Arnold Worldwide and BBDO. She likes traveling and peanut butter.

I was majoring in Journalism...but I loved creativity and writing, and hated research and bad news! I took an Intro to Advertising course as part of the major, and discovered you could be paid to make stuff up and (attempt to) be funny.

2. What advice would you give yourself when you were starting your career?

Stop worrying! The student loans will get paid. You will get a job. Even if you don't get your dream job right away, everything is a stepping stone, and you just keep moving forward.

Cloud Atlas, by David Mitchell. And this was well before that disjointed attempt at a movie that didn't begin to capture its brilliantly written, interwoven series of stories. Also, a short, quick read called Sense of an Ending by Julian Barnes. Very cool approach to solving a personal puzzle using unfolding memories and present day developments.

All the King's Men by Robert Penn Warren and Catcher in the Rye by JD Salinger.

5. Sites you visit every day?

Slate, but I'm fairly tired of politics, so I tend to stick to the general interest stories and quirky articles. Also, the Onion, though I don't go there as often as I should. And Facebook, but I'm usually not sure why, because the people who post the most often are the ones with the least to say.

6. What do you do when you’re stuck for ideas?

First step is to cheat--I mean, get inspired--by pulling out award show books to see how more creative people have solved problems. I've also always been partial to drawing a picture of a duck in my sketchpad. It has never helped in my entire career. But you never know when it might.

Thanks.
Check out Melaine’s work here.

Does your ad stand out? 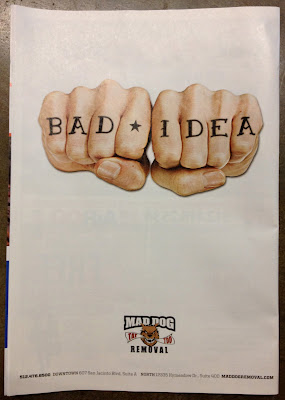 This ad for Mad Dog Tattoo Removal jumped out at me - especially since it was surrounded by competitors' ads that look like this.

I still think Ram had the best spot of the night with "God made a farmer."


Here are the other spots that I wish I had done:

Coke Chase is beautiful, fun and had a social voting component baked it. It's just a shame CokeChase.com crashed shortly after the spot aired.

Perfectly executed effort from Taco Bell. I wonder what my Grandpa would have thought of the Doritos Locos Tacos Supreme?

This made me wish I could go back to 1991 and give myself an Audi - or that I could afford one now.

Prudential's ad doesn't feel like a "Super Bowl" commercial, but it's simple and smart. The fact that it was filmed in Austin doesn't hurt either.

Samsung's spot was made for ad geeks.


And for a real-world counterpoint, here are my wife's favorites:


No surprise that she loves Amy Poehler and Oprah.


Email ThisBlogThis!Share to TwitterShare to FacebookShare to Pinterest
0 Comments 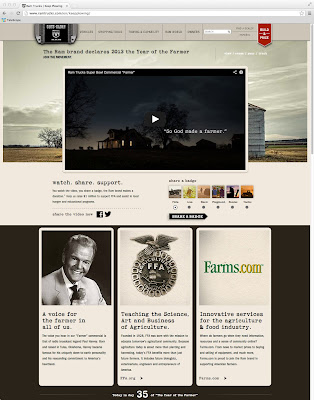