It's the psychological phenomenon of perceiving random stimulus as significant. The term is also used to describe the knack we have for seeing faces in inanimate objects.

I didn't like this American Express ad the first time I saw it, because it's just borrowed interest from Faces In Places.
(On a side note, shouldn't they work out an online promotion with the guy behind that blog?)
But after seeing the spot on air a few dozen more times, I stopped thinking like a cynical creative and realized that every time it came on I started smiling.
And this print ad I saw in the New York Times magazine does a much better job tying the visual to the product benefit. 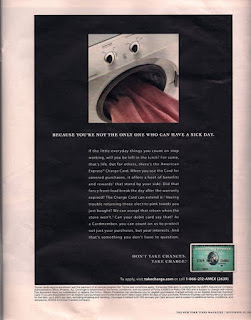